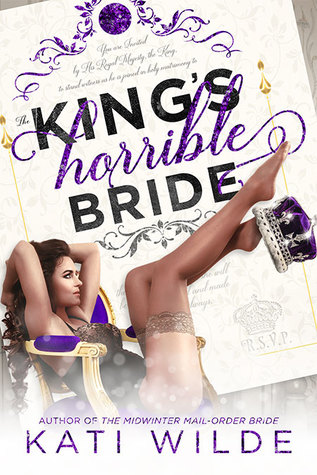 Official Blurb: After inheriting Kapria's throne, Maximilian's only objective was to erase his father's corrupt legacy — a task that might have been impossible if a dying billionaire hadn't given Maximilian his fortune... and his daughter, Victoria. Twelve years later, Maximilian has finally secured his kingdom's future, and he's ready to claim his bride — even if his advisors insist that she's a horrible choice.

They aren't the only ones who need persuading. Because after waiting for so long, finally marrying Maximilian should have been a dream come true for Victoria. Instead she's caught in a nightmare of duty and obligation, betrothed to a king who pretends to love her in front of the cameras. She always wanted to be the perfect bride... but when she's not fantasizing about Maximilian's big hands, she's dreaming about running away.

But Maximilian will never let Victoria escape him. Because the king isn't pretending, and he's waited long enough to claim his queen...

Review: After reading the little novella by AR, I realized that this was a series, so I had to click the next one. This is my first book by Kati, and I really enjoyed it.

This book is much different than the other one I read. It’s a lot of detail, and if you aren’t paying attention, you will miss something. Maximilian’s goal for the last twelve years has been to clean up the mess his father left behind. Now, he’s ready to claim his bride, even though the odds are stacked against them.

Victoria has been waiting on Maximilian for the last twelve years. She has done everything she can to prepare, and now, she is ready to become the queen. Although, Victoria is quickly realizing that not everything is as it seems.

This book is good, but there are parts that frustrated me too. Victoria did everything to prepare for Maximilian, but he wasn’t ready for her. She literally had to knock him down in order for him to see what was right in front of him. It’s a good read with a cute little HEA.