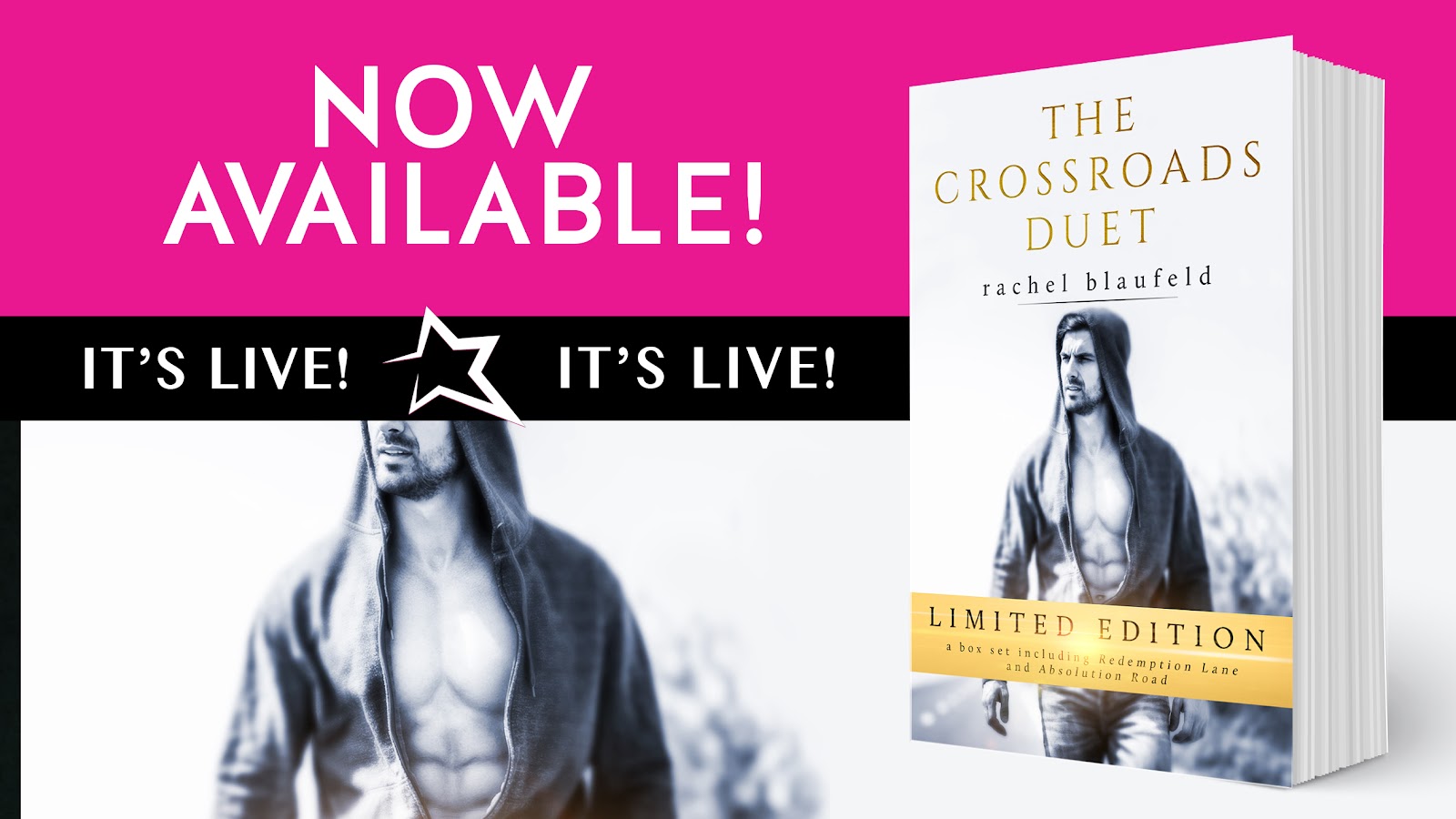 LIMITED EDITION BOX SET!!
Twin brothers, both broken and in love with the one person they shouldn't be in love with...

The Crossroads Duet by Rachel Blaufeld is ONLY $0.99 & Free on Kindle Unlimited! 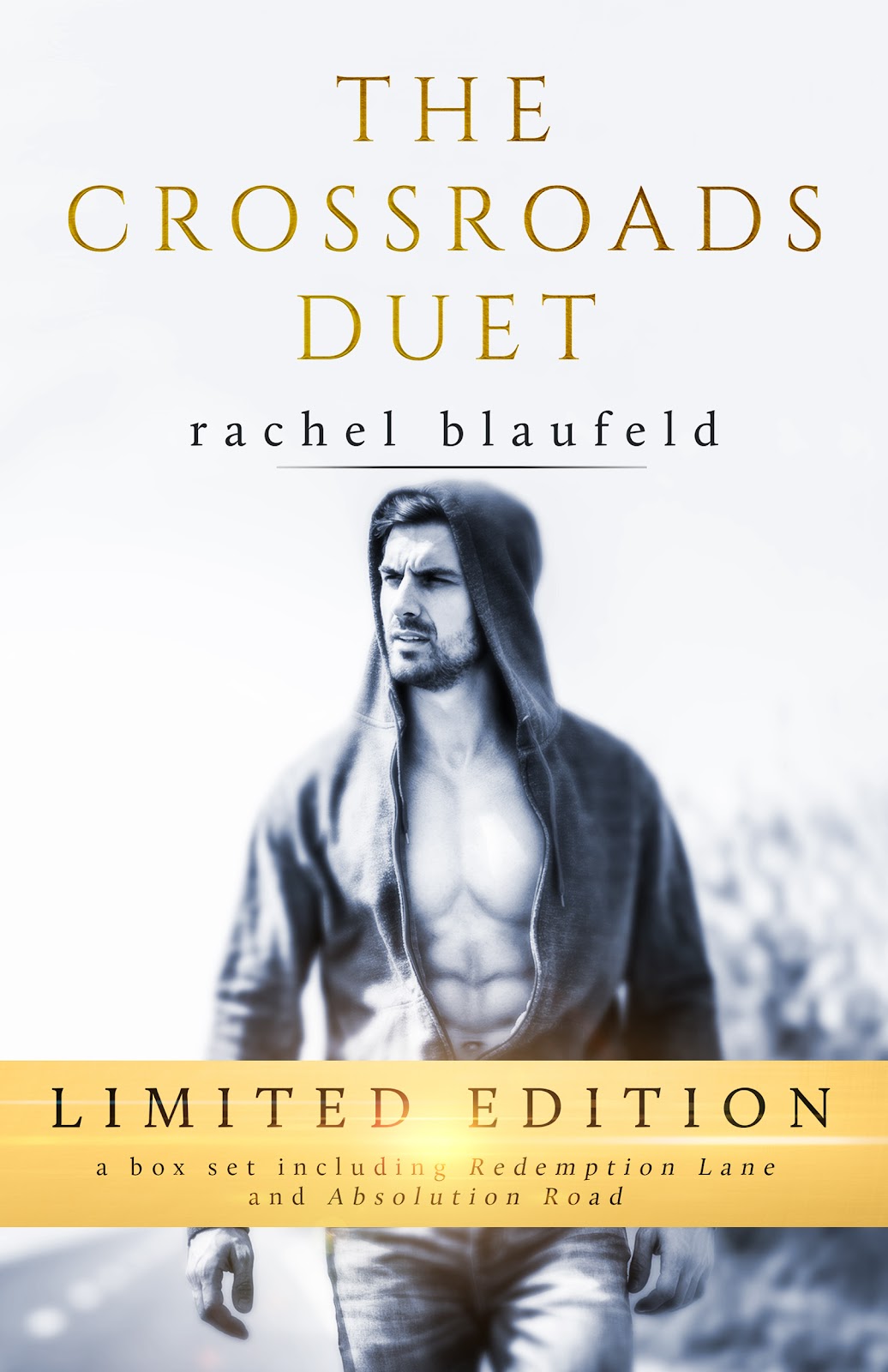 Redemption Lane
Sometimes the past bleeds into the future.

Bess, a wild party girl running from herself, literally falls victim to her demons when she collapses in the most unexpected of places.
Lane, a tightly wound, up-and-coming CEO who can’t seem to stop enabling his brother, doesn’t know what hit him when Bess falls at his feet and into his life.

It was a night she doesn’t remember, and one he can’t forget.

But rather than stay and help the needy college coed, Lane decides to teach his brother a long overdue lesson––a decision that later comes back to haunt him and only adds fury to the transgressions of his past he is already fleeing from.
Years later, Bess and Lane meet again. She doesn’t know him, and he doesn’t share that he knows what happened on that ill-fated night when she almost died. After all, he has a web of complicated lies from his own youth to protect.

Both are seeking salvation in the arms of others and ignoring the truth—that the only road to redemption lies in confronting your past.

When the past and present collide, is there any chance at redemption?

For Jake Wrigley, the future is bleak. Some people are survivors, but he’s getting by on his bad-boy looks and charming smile. He owns a gym, gets into bar fights, and wrestles his demons with rough workouts—both in and out of the bedroom.

For Alyson Road, the future is bright. Life can only improve from where she grew up. She graduated at the top of her law class, cares for her ailing mom, and in her job, she defends those who can’t afford anyone else. Her work is thankless but honest.

Jake’s twin brother has been covering his ass for as long as they’ve been alive, but that all changes when Jake finds himself in front of the fiery public defender, his future in her hands. For the first time ever, he doesn’t want to involve his brother, finally realizing he needs to stand alone, be his own man.

Even if Jake’s never absolved of his past wrongdoings or his heart is never scrubbed of the blackness that resides there, he can do one good deed—protect the beautiful lawyer who touched his soul—until helping her nearly becomes his own undoing. 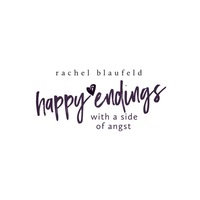 Rachel Blaufeld is a bestselling author of Coming of Age, Romantic Suspense, and Sports Romance fiction. She recently asked her readers to describe her, and the adjectives they came up with included: insightful, generous, articulate, and spunky. Originally a social worker, Rachel creates broken yet redeeming characters. She’s been known to turn up the angst like cranking the heat up in the dead of winter.

Turning her focus on her sometimes wild-and-crazy creative side, it only took Rachel two decades to do exactly what she wanted to do—write a fiction novel. Now she spends way too many hours in local coffee shops, downing muffins and plotting her ideas. Her tales may all come with a side of angst and naughtiness, but end deliciously.

Blaufeld, also an entrepreneur/blogger, is fearless about sharing her opinion. Before turning her pen to fiction, she captured the ear of stay-at-home and working moms on her blog, BacknGrooveMom, chronicling her adventures in parenting tweens and inventing a product, often at the same time. She has also blogged for the Huffington Post and Modern Mom.

Most recently, she shares conversations from being “In Bed with a Romance Author” and reading recommendations over at “Happy Ever After” on USA TODAY.

Rachel lives around the corner from her childhood home in Pennsylvania with her family and two beagles. Her obsessions include running, coffee, basketball, icing-filled doughnuts, antiheroes, and mighty fine epilogues.