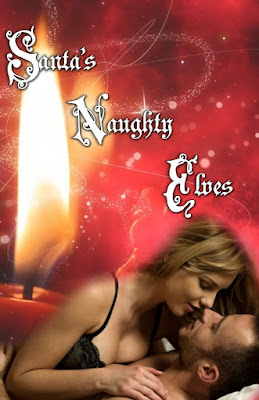 Joss and her husband Bradley have a yearly Christmas ritual they think is a secret: they cheat on each other. But things are very different this year as they find themselves in Prague for her husband's company Christmas party. Joss gets a very unexpected visitor. In the U.S., the only figure we really know of is Santa Claus, and it's his job to reward the good little boys and girls with presents. But in Eastern Europe, there's another tradition: an anti-Santa who punishes the bad children: a goat-headed demon by the name of Krampus.

Joss has been very bad, you see, and Krampus knows all the best ways to punish her. She's in for a Christmas Eve she'll never forget!

Christmas Must Be Tonight
Ashlei Hawley

All she hoped for was to snag the ultimate Christmas gift for her band-obsessed brother. One sexy drummer is going to deliver that and so much more!

Just when Celeste thinks she's out of time to get some unique swag from her brother's favorite band, the drummer from Beneath the Deep responds to her contact requests. Aibel is accommodating, polite, and sexy as all hell. This all-access holiday season is going to have hot action you won't want to miss!

He haunted her every Christmas for over twenty years. Leaving lavish gifts and heart tearing letters that made it nearly impossible for other men to measure up. He never talked to her, Joyce rarely even got to see him, but the memory of when she caught him in her house when she was a child never faded.

And now he has finally come to her with an offer of a night with him, a fantasy she has had ever since she was old enough to know what love was. But when the sun rises will Joyce be able to let him go? And more importantly, will he be able to leave her behind?

Noelle Kerstman hates the holidays. She normally spends her Christmas watching horror films and stuffing herself with junk food hiding away from the world. But this year life throws her into the path of Cole Anderson, a sinfully sexy businessman who's determined to get her under his tree and naked this Christmas Eve. Will Noelle spend another holiday alone or will she embrace the undeniable chemistry they have together?

After surviving a disastrous relationship, Angel moved out to the Big Apple, New York City, to start over. After graduating college and landing her dream job as a published Author years later, she thought her life was finally going right. Now that she had billionaire Michael Andrews at her side flaunting her with every piece of his delectable backside, she could finally forget her past.

But her past is about to catch with her when her ex decides to crash her perfect Christmas and everything wonderful about Michael might not be as good as she thought. He’s hiding a secret that could end their love if her ex doesn't end her first.

Will she choose to stay and fight for the love she wants, or finally call it quits when Michael shows her all of him? Santa Michael may have the perfect presents, but these presents have strings.

Miranda Clay is a tough, workaholic that takes her Loss Prevention position very seriously. Roland Jefferson was a young man that simply made a mistake. He lost seven years of his life due to Miranda's unyielding dedication to her job. Now, Christmas seven years later, Roland is ready to get revenge. And to give Miranda a little gift that she's been needing.

Mary hated going back to her hometown for the holidays. Her mother was judgmental, using every moment she had to remind Mary of what a disappointment she was. And how she was going to hell for her sins. Mary didn’t expect this Christmas to be any different.

But then she saw Damian, the boy she couldn’t stop thinking about. He wasn’t a boy anymore, and Mary’s thoughts weren’t pure.

This Christmas was going to be an interesting one…

With a life time of ups and downs that never seemed to land her in any one place for long. She has never found a subject that didn't interest her, and something she wasn't willing to try at least once.

In 2015 she moved to North Carolina USA to work with her parents on their small farm and is endeavoring to start a new career as a writer and author, specifically in the Fantasy and Fiction genre's. She hopes you enjoy her work and is welcome to any communication from potential fans.

Alice La Roux is a dirty minded, mouthy author who is still trying to find her genre while dabbling in erotica, fantasy and horror. She’s a bookworm who reads anything and everything and is addicted to social media. Find her on Twitter @AliLaRoux or see random pictures of her dogs and food over on Instagram @AliceLaRoux. Feel free to add her on Facebook, she doesn’t bite…much.

Tracy Millosovich lives and writes in Wisconsin with the love of her life, three cats, and a pile of signed books by her favorite authors. With her witty words, gentle hands, and wisdom, she weaves together a world of colorful hope bringing love into the darkest places. An advocate against domestic violence and online abuse, Tracy paves a way for everyone to live their lives free of violence. Become friends with Tracy online where she joins forces with fellow authors, and readers against abuse, and bullying.

Bryan Tann is a budding fiction writer whose genres include paranormal action, paranormal fiction, and dystopian science fiction. Bryan has been writing seriously since 2007 and has recently signed a contract with CHBB/Vamptasy Publishing. This is his first full-scale attempt at erotica.

Bryan was born and raised in Pittsburgh, PA and spends his time thinking up new ideas as often as possible while binge watching Netflix and Hulu and anything and everything he can.

K.M. Cox is a New Adult author. She has been writing for a year and currently has nine stories to show. She’s a good girl, with a bad mind. When she’s not writing, K.M. likes to read, crochet, and play with her furbabies. Born and bred in N.Y., K.M. lives in a cottage, right by the water with her husband. Follow: pintrest/Instagram/twitter: @onepetitemiss. And find her on facebook under Author K.M. Cox
Labels: Anthology Santa's Naughty Elves