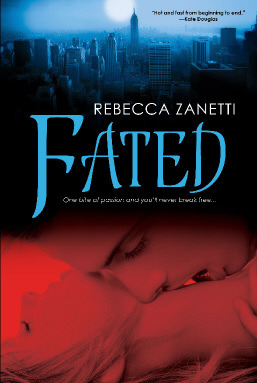 Marry Me! Cara Paulsen does not give up easily. A scientist and a single mother, she's used to fighting for what she wants, keeping a cool head, and doing whatever it takes to protect her daughter Janie. But "whatever it takes" has never before included a shotgun wedding to a dangerous-looking stranger with an attitude problem.
Or Else! Sure, the mysterious Talen says that he's there to protect Cara and Janie. He also says that he's a three-hundred-year-old vampire. Of course, the way he touches her, Cara might actually believe he's had that long to practice. . .


To be honest, this is the first book I’ve ever had to sit back after reading and decide whether or not I liked it. There are elements of this story that really made me cringe while others made me nearly laugh out loud. While I understand the authors need to drive into the head of the reader that these male vampires are hardwired to take possession of their mates when they find them, I just couldn’t shake the fact that it seems nearly as if our heroine Cara is forced into submitting to her “mate” Talen, whom has the ability to take away someone’s will to move amongst other talents. One other aspect that troubled me is how Cara just married Talen without even knowing him to protect her daughter and that she so quickly bought that they were “mates”. The scenes with her psychic daughter Janie and her interactions with some of the other vampires in Talen’s family were some of the only bright moments in this book for me.

This book reminds me of a mix of the bad parts of Fifty Shades of Grey and The Black Dagger Brotherhood. Looking ahead to the next book in the series, Claimed, it seems to follow the similar pattern as BDB does with each set of characters getting their own book while intertwining with the characters from the previous book. I do plan on reading the next book in this series with hope that it can smooth out the issues that so plagued the first book.
Labels: Book Review