Review: Too Many by Alexa Riley 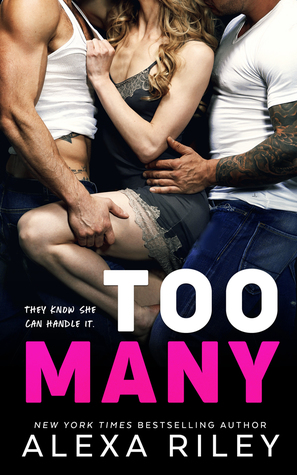 Official Blurb: Nellie has a desire so filthy she can’t say it out loud, but having two men at once was never on her radar until she met the twins. Now all she can think about is being sandwiched between Owen and Elijah. It’s all just a fantasy, because she could never have it in real life. Right?

Elijah and Owen have finally graduated college and are taking over the family business from their dad. The final step in creating the life they want is claiming Nellie. She’s the one they’ve been waiting on, and though she might be shy, they know she’s made to take them.

Warning: Can a woman really have too many men love her? We don’t think so! Grab the follow-up to Too Hard and find out if these three can find their happily ever after.

Review: First off, I have been waiting on Elijah, Owen, and Nellie’s story, since I finished Too Hard, and I was super stoked to dive in. Second, the cover is gorgeous!!! I swear AR covers are to die for, and they are ALWAYS on point! Just pure perfection.

To me, this book is insta-love, but it’s also a slow burn as well. Elijah and Owen knew that Nellie was the one the moment they met her, but they had to get some things in order first. Now, it’s three years later, and things are finally falling into place. Their degrees are finished, they are stepping up to take over the family business, and it’s finally time to claim their girl.

Nellie is in a bit of a slump. Everyone around her is either getting married, having babies, or moving up in their careers, but she’s still sitting in the same little bubble. On top of it all, she is attracted to not one, but two men, and she doesn’t want to choose. Can Nellie and the twins have their HEA, or will all of them be left heartbroken and alone?

So, I adore the relationship between Elijah and Owen. One twin is hot-headed, while the other is calm and mellow. They balance each other out in every way, but when it comes to Nellie, they are both in sync, because she is meant to be theirs together. The chemistry, sexual tension, and sex scenes are all smoking hot (to a whole other leave) in this book. I seriously love all three of these beautiful people the same, and I was so happy at the ending. This is probably my all-time favorite book by the amazing AR duo. Get this book now because it’s a banger!