Skip to main content
Labels
Posted by Saints and Sinners Books May 12, 2019

Review: Too Hard by Alexa Riley 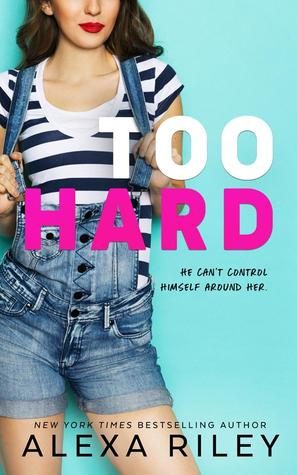 Official Blurb: Harlow Harrison has just moved into a new apartment. The only problem is that Harlow thinks she can do everything on her own when it’s better to leave it to a professional After a disastrous water leak and an emergency call, the man that comes to her rescue might be more than she can handle.

Butch Barton is busy running his company and raising his adopted twin sons. They’re almost ready for college and he doesn’t know what he’s going to do with himself when they’re gone. One night on an emergency call he meets a young woman who calls to every dark place inside him. He’s old enough to be her dad and he has to keep his distance. The only problem is, Harlow doesn’t agree and it won’t take long for her to break down his resolve.

Review: It’s no surprise by now that I love this writing duo, and this book is right up at the top for me. I mean, it literally has everything older man/ younger woman, alpha male, and insta-love. What’s not to love?

Harlow is a bit of a nerd. She lives out on her own, and she thinks she can fix anything by watching a video. Oh, how very wrong she is. When she messes up her kitchen big time, Butch comes to the rescue. Harlow and Butch are both attracted to each other right from the start, but Butch thinks he’s too old for her. Technically, he’s really not that old, but he tries his best to fight his feelings. Yeah, that doesn’t last long, because Harlow turns his world upside down in more ways than one.

I loved this book so hard. It’s the perfect mixture of sugary sweet and down right sexy. I adored both Harlow and Butch as well as the side characters. Now, fingers crossed we get the twins book very, very soon.