Review: Mated to the Reaper by Alexa Riley 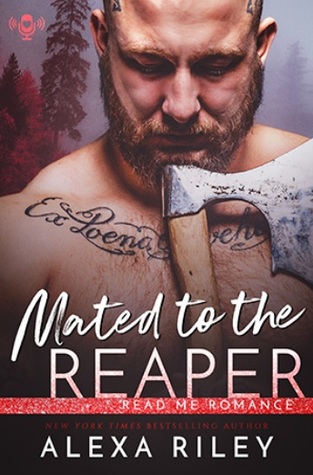 Official Blurb: Ariella Sterling was raised by a coven of vampires, but she was different than the rest of them. She was a miracle from the time she was born, and her parents worried about her safety. She was protected and cherished like no other because of her abilities, but something has changed since her eighteenth birthday. There’s a pain growing inside her and she doesn’t think she’s going to make it much longer. When the Grim Reaper walks in everything changes and now she’s got to fight for what’s hers.

Grim Reaper has spent years alone carrying out what he’s destined to do. But when he’s called to take another immortal soul, he realizes this one is different. From the moment he sees Ariella, he knows she’s his mate, but her family steps in and tries to keep them apart. They can do what they want, but there’s no stopping Death, and he’s going to fight for what’s his.

Review: Ahhhh! I have been so very excited about Grim’s story, and believe me, it did not disappoint one single bit. When I read the stories about all of the vampire couples, I was very curious about Grim’s story right from the moment he was introduced. So, it was very surprising, when he ended up exactly back where he was first introduced in the last vampire book.

Ariella is quite unique from her family. Her mother is a vampire and her father is a human, which means her mother wasn’t supposed to have children, but she did end up pregnant by some miracle. Since birth, Ariella has always known she was different from her family. She has abilities that feed off people’s emotions, and she can walk in the sun. Since her eighteenth birthday, a strong pain has been growing inside her, and she thought for sure she was dying, and she has excepted this fate. Little does she know her whole world is about to be turned upside down.

Grim has lived a very lonely life, and it’s been eighteen years, since he’s seen the coven of vampires that he left. The last time he saw them it wasn’t on the best of terms. When the feeling hits him that another soul is ready, he has no idea his destiny as the reaper is about to change. When he steps into the coven again, his world is shaken up in more ways than one. Ariella isn’t dying because she’s sick. No, she’s dying because she needs her mate, and Grim will stop at nothing to satisfy her hunger as well as his.

I really loved this story probably even better than all of the vampire stories. Well, expect for Bishop, but he is always the exception. This is unlike any story I’ve read before, but it’s also got the perfect mix of AR beauty all throughout the story. Don’t miss out because this book is a top read for me.