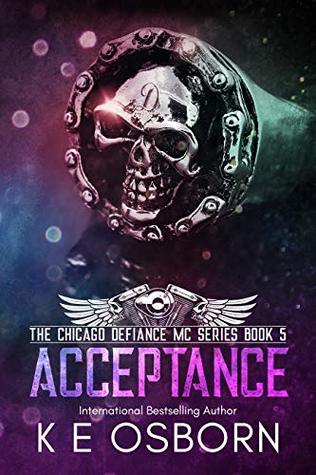 Official Blurb: Try to forget.
It's easier said than done.

My past—violently haunts my dreams.
My present—belongs to an MC. My brothers, my support, my family, my life.

But what if you left someone behind?
You failed them.
And set in motion a series of events no one could have predicted.
But in deserting him, you found her.
A constant. A guiding light. A connection that can't possibly not be right.
Or is it?
This story isn’t just two souls finding their connection—it’s lust, treachery, misery, and brutality.

Vengeance—will thrill you.
But will I be able to gain my acceptance?

Review: So, I’m completely hooked on this series, and I was super excited to read about Bex and Chains story. And believe me, it’s everything I wanted and more.

I knew Chains’ story was going to be dark and mysterious, because of course, he is as well. I just had no idea how much he actually went though. He suffered such horrible things that no child should ever have too, and when he was sixteen, he was saved by his angel and her family. Now, he’s a part of the Chicago Defiance MC, but he still suffers from his past. There are mistakes he made that he wants to make right. Also, he is fighting his feelings for Bex, because he doesn’t want to lose his best friend and the only family he’s ever truly belonged too.

The day Bex met Chains her whole world changed in more ways than one. She has dedicated her life to saving him, which is why she became a doctor in the first place. Now, his past is back, and Bex is scared that he will get caught up in that world again. She is also fighting her feelings for a man she doesn’t think she can have.

This really was an amazing story. I loved the background between these two, and to me, it’s like a slow burn, but oh so worth the wait. I also adored best friends to lovers, and that’s exactly what these two were for each other. I fell in love from the beginning and was completely hooked. Now, I can’t wait for the next book!