Review: The D.I.L.F. by Amy Andrews 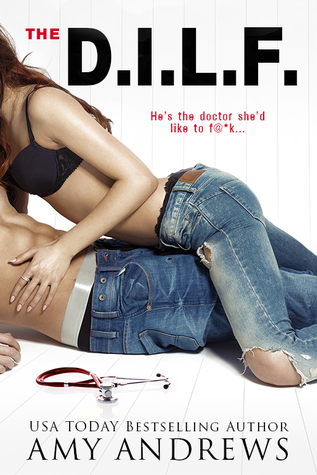 I’ve had a crush on Stefanie, my best friend’s older sister, since I was fifteen. As a geeky gamer with a bad case of acne, she was totally out of my league. But I’m all grown up now, with a medical degree and an in-depth knowledge of female anatomy I’m not afraid to use. When we cross paths again I finally get my chance to live out a few teenage fantasies and prove I can be her guy. I just have to convince Stef to take a chance.

As a resident nurse,I’ve had enough of arrogant doctors to last me a lifetime. I’m not looking for another. I’m especially not looking to hook up with my kid brother’s bestie—ten years my junior—even if he has morphed into a walking, talking, wet dream. If only he wasn’t sleeping in my spare bed for three weeks and making it very clear he wants to be in my bed instead. Not going to happen. I don’t do casual anymore. No matter how much I want to open my legs for the DILF.

Review: So, this was my first book by this author, and overall, it was a cute, quick, and dirty little read. I love best friend’s sister books for some reason, so by that alone, I was hooked from the blurb.

At first, I thought the title of this book meant something else, but just to be clear the D stands for doctor, so there isn’t any confusion. I wasn’t disappointed, but I just thought it was something different. Let’s get into the story… Owen has been in lust with Stefanie, since he was fifteen and saw her at his best friend’s lake house. Now, it’s ten years later, and Owen isn’t the little geeky nerd he used to be. No, he is all man, and he has his sights set on Stef.

Stef never paid attention to Owen that summer at the lake house. I mean, he is ten years her junior, so she never gave him the time of day. It’s been ten years, and Stef has had her fair share of ridiculous men in her life. She is looking to settle down and start a family, and she knows Owen is just looking for a little fun in the sheets. Or is he? Can Stef get past her issues, and finally, give Owen the chance he deserves?

This was a cute little book don’t get me wrong, but I did have a few issues. Owen is her brother’s best friend, so how has she not seen him at all in over ten years?! Doesn’t really add up. Also, the title threw me off because I was expecting something different. I can also tell the age difference by some of the things that come out of Owen’s mouth, but he does worship Stefanie. There was a lot of back and worth for a while too that wasn’t really necessary. I wish there would have been a bit more to the end, but overall, it was pretty good. If you like dirty, then this is definitely the book for you.