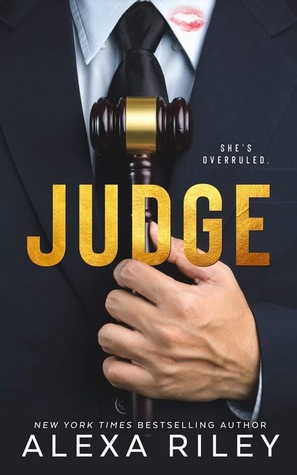 Official Blurb: Nora Vaughn is living on the streets and trying to keep under the radar. Luck is on her side one day when the hot stranger she’s been watching drops his keycard and she’s able to get into a safe place. What she doesn’t expect is for him to find her naked in the shower and demanding she repay what she’s stolen.

Smith Prescott is a well-known judge who has worked his entire life to build a reputation. But one look at the young woman in front of him and he’s willing to throw it all away to have her. She’s forcing his hand and his iron will to do the things he’s sworn against. But what’s the point of having all this power if he can’t use it to have her?

Warning: This is quick and dirty and dripping with filth. If you love our books Coach, Mechanic, Thief, and Kingpin, then this one will give you all the feels you’re after. Enjoy some quality time in the judge’s chambers.

Review: So, this is an AR book, and I knew I was getting an insta-love over-the-top alpha. One thing though, this is the breeding series, so the heat is turned up, and things get a little bit dirty.

Nora hasn’t had the best life, and she can’t seem to catch a break. She’s living on the streets, while sneaking into a local gym just to take a quick shower. She has her routine down, even though she knows it can’t last. At least, she has a place for comfort for a bit. Well, that is until Smith catches her naked in the shower, flipping her whole world upside down once again.

Smith has always followed the rules, and he has a reputation that he stands by. That is until Nora literally makes him lose his mind. Now, he is doing anything and everything to protect the girl who has changed his whole entire outlook on life.

This book is definitely sweet, but also filled with plenty of heat and an alpha who will do anything to protect what’s his.