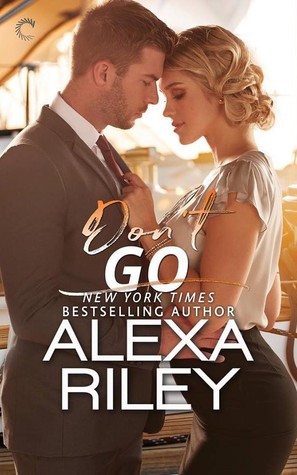 Official Blurb: CEO Henry Osbourne has only ever desired one woman—the one who got away. New York Times and #1 ebook bestselling author Alexa Riley returns with Don’t Go , a virgin-hero insta-love contemporary romance in the For You series

I’ve spent the past ten years convincing myself that what I felt for her was teenage infatuation. That love so consuming couldn’t be real. Then everything went to shit, and in an instant, she was gone.

Kory Summers knew returning to New York meant running into Henry. The way her heartbeat picked up at just the thought was nervousness—not anticipation. Oh, no. She never expected to find him on her doorstep looking as handsome as ever.

She’s mine. She always has been. I’ve waited this long for her…but time’s up. I’ll use all my power, all my connections, to convince her she’s the one.

Kory ran from a boy, but a man of power and persuasion now stands in his place.

This book is approximately 20,000 words

One-click with confidence. This title is part of the Carina Press Romance Promise : all the romance you’re looking for with an HEA/HFN. It’s a promise!

Finally, we get Henry’s story, and he is just as wonderful as his father. Kory and Henry met when they were both young. They both knew there were strong feelings involved, but neither knew just how important those feelings would be. After a huge situation occurred, Henry and Kory have spent the last ten years missing out on the one who got away.


They meet again ten years later and Henry knows he will not make the same mistakes this time. Kory can run, but she can’t hide because he has his sights set directly on her. I love second chance romance books, and these two were perfect for each other. I wanted a bit more, but overall the insta - love and amazing chemistry kept me sucked in until the last page.