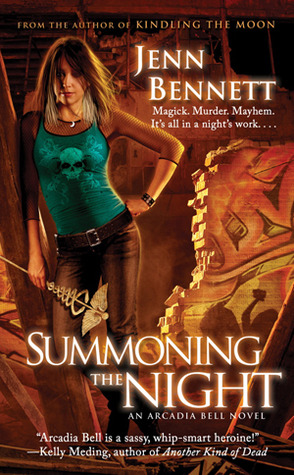 After narrowly escaping her fate as a sacrificial scapegoat, Arcadia Bell is back to normal. Or at least as ordinary as life can be for a renegade magician and owner of a tiki bar that caters to Earthbound demons. She's gearing up for the busiest day of the year—Halloween—when a vengeful kidnapper paralyzes the community. The influential head of the local Hellfire Club taps Cady to track down the fiendish bogeyman, and now that she's dating red-hot Lon Butler, the Club's wayward son, she can hardly say no.

Cady and Lon untangle a gruesome thirty-year trail of clues that points to danger for the club members' children. But locating the person behind the terror will require some metaphysical help from Cady's loyal bar patrons as well as her potent new Moonchild powers—and she'd better figure it out before the final victim disappears and her own darkest secret becomes her biggest enemy.

This series just keeps getting better and better!!!! Cady and Lon are back into the thick of the drama and mystery of the demon world. Cady knows just how special she really is and knows keeping her real identity a secret is even more crucial than before. She’s working on controlling her budding new abilities while balancing out the new family life she has with Lon and Jupe. When an unsolved mystery of missing children comes back to haunt them, Cady and Lon must stop at nothing to find the kidnapper and protect Jupe.

Cady and Lon’s relationship continues to blossom, but doesn’t take up too much on screen camera time as it did in the first. While I do love a good love story, the Arcadia Bell series is purely UF. I do love a good PNR, but when the story is written as magically as Bennett has created in this series. Who needs steamy romance when the story is this good anyway!!! Bennett also has the ability to create these amazing one line zingers. I highlighted so many throughout reading this novel that I can’t share them all here, but this one stuck out to me.

“Oh, really? Is that why he’s hot and bothered for here?” Kar Yee tossed an accusatory glance my way. She was well aware that honesty wasn’t one of my strong suits. “Probably,” Jupe confirmed. “My dad says he likes her so much that if she kicked him in the balls, he’d just thank her.”

Bennett continues to deliver on her new debut series. It’s imaginative and enticing. Its one of those books that will suck you in and leave you pissed its over too soon. On to the next book, a novella, entitled, Leashing the Tempest.
Labels: Arcadia Bell Series Book Review Jenn Bennett