Review: Syn in the City by Mertianna Georgia 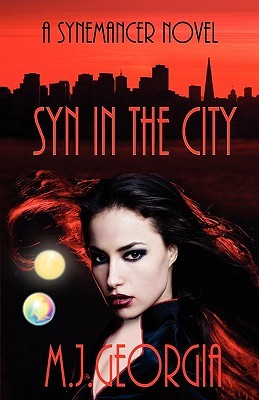 She was born a witch with no powers . . . Cara Augustine came from a long line of powerful witches so it was a huge disappointment when her family discovered she might as well have been a human. Only her cousins Evika and Sonya, born on the same day as Cara, treat her as an equal. On their twenty-first birthdays, Evika convinces Cara to go to San Francisco to celebrate. To Cara's horror, she awakens the next morning in bed with a handsome-and apparently dead-stranger and Evika is missing. As Cara searches for her missing cousin, her powers suddenly manifest, spinning her life wildly out of control. Not only does she now have powers, but she is a Synemancer-a witch who can draw energy from other magical beings and weave them into immense energy. And her powers have a mind of their own as they draw supernatural men to her so they can grow in strength. Before she knows what's happening, Cara has bound three men to her-a Nightkind, a Werewolf and a Wizard. If that isn't enough, deadly, animalistic sub-demons are now trying to kill her and someone has awakened an ancient Aztec demon-god who wants to bring back the good old days of human sacrifice-and only a Synemancer can stop it. In a race against time, Cara has to learn to juggle her three men, control her power, find her cousin and stop the Aztec demon. She's sure she can't do it all, but if she doesn't she'll lose everything and everyone she loves. She has to try, even if it means she's guaranteed to die . . .
Review:

Cara has long thought that she’d be a powerless witch from a very powerful witch family. Her cousins, that share her birthday, whisk her away on a fun filled night to celebrate their 21st birthday. When Cara wakes up next to a handsome Nightwalker with a huge diamond on her hand, she panics. Her birthday celebration is a blur and her cousin Evika is missing. She struggles to remember her night on the town, and finds that she’s suddenly more powerful than she thought. She has no control over her powers and finds herself wedged between several men. She is suddenly the hottest thing on two legs to a bevy of supernatural creatures, which you can only imagine causes some strife between her suitors. Her synemancer abilities have bound the men to her and attracted an Aztec demon-god hell bent on escape from his prison. Cara has become the epicenter of the end of the world. She knows she’s the only one who can stop the demon god, but will she come out alive?

Syn in the City is fun, thrilling read. I applaud Mertianna Georgia for creating such a unique story. The idea of a synemancer is simply magnificent. I’ve never been introduced to such a magnitude of powers wrapped into one character. The Syn in the City has major potential to become one of the break out hits of Summer 2014.
Labels: Book Review