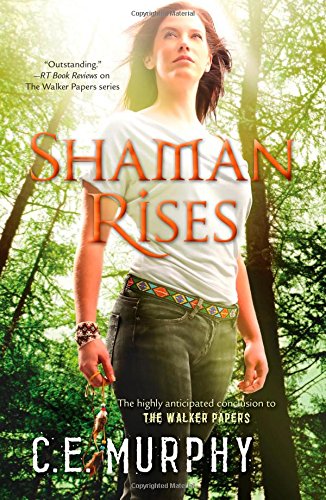 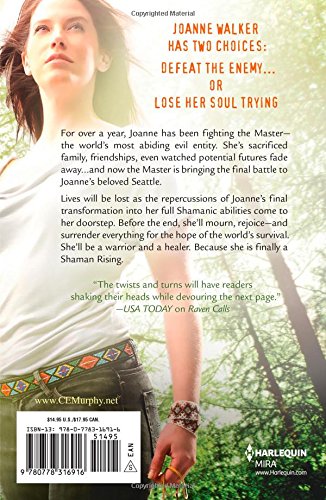 For over a year, Joanne has been fighting the Master—the world's most abiding evil entity. She's sacrificed family, friendships, even watched potential futures fade away…and now the Master is bringing the final battle to Joanne's beloved Seattle.

Lives will be lost as the repercussions of all Joanne's final transformation into her full Shamanic abilities come to her doorstep. Before the end, she'll mourn, rejoice—and surrender everything for the hope of the world's survival. She'll be a warrior and a healer. Because she is finally a Shaman Rising.

Jo has faced insurmountable odds against the shadows in the shaman world. She’s defeated gods, found a long lost child, lost and loved. It isn’t until Shaman Rises that she must put her life on the line to save the world. The Master has come home to roost in her native Seattle and painted a target on Jo’s back. Master and the Raven Mocker are not above using the ones she loves most to get to her. She must submit to her shamanic powers in order to defeat The Master, but can she accomplish this daunting task without surrendering her soul in exchange?

To call Shaman Rises an epic conclusion to an exciting series is putting it lightly. Jo surrenders to her calling of being shaman and uses her full abilities to combat the prime evil that is the Master. Jo’s reluctance to accept her role in the shamanic world in the beginning of this series has come to an end and she must become what she’s destined to be in order to defeat him. She makes very difficult decisions and knows that she may have to sacrifice herself for the common good. Jo’s character development and witty yet fierce personality rivals any other book heroine. One thing I specifically like about this series is the sheer fact it isn’t your normal urban fantasy. The Walker Papers is immersed in ancient culture and beliefs. You wouldn’t expect to find a shaman being your main character in an UF tale and I absolutely love that about this series. The other characters bring such a colorful and beautiful addition to Jo’s story. The tidbits of romance also had great character depth. This series is an amazing accomplishment for C.E. Murphy in the sheer fact that it brings something new to the UF world. I have enjoyed reading this series and I greatly look forward to the next adventure of C.E. Murphy’s because I know it will be just as amazing as Jo’s story.
Labels: Book Review