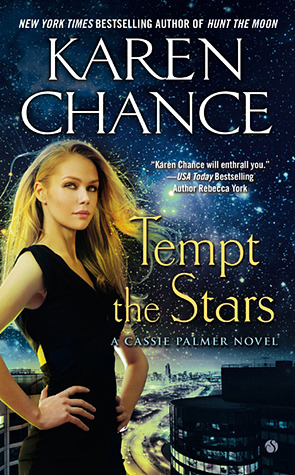 Being a goddess is a lot less fun than you might think. Especially when you’re only a half goddess, and you only found out about it recently, and you still don’t know what you’re doing half the time. And when you’ve just used your not-so-reliable powers to burglarize the booby-trapped office of a vampire mob boss.
Yeah, that part sucks.

But that’s just the tip of the iceberg for Cassandra Palmer, aka the Pythia, the freshly minted chief seer of the supernatural world. After all, Cassie still has to save a friend from a fate worse than death, deal with an increasingly possessive master vampire, and prevent a party of her own acolytes from unleashing a storm of fury upon the world. Totally just your average day at the office, right?

Review and Spoilers Below:

This series was a little harder to get into for me than most. It came highly recommended from my friend and fellow book lover, Bonita *HI BONITA!* This book felt like a filler book as I read it. While it had the normal action packed, non-stop chaos that seems to follow the lead character Cassie, I found that it was mostly a book about discovering the truth about Cassie’s parents. Cassie even time travels back, meets her parents, and even holds herself as a baby (which I found QUITE odd). Cassie discovers the terrible stories about her father where just convenient fabrications to protect his family. Yet, throughout the book you discover just how devious and masterful her mother was and her true identity as the goddess Artemis.

The best part of this book for me is Cassie’s realization that Pritkin, a half demon war mage, isn’t just a tutor and a friend in her eyes. While she doesn’t exactly show her true feelings for him, she comes as close as we’ve ever been to telling him how she feels. I feel like KC’s decision in keeping Mircea, Cassie’s master vampire boyfriend, away because of the actions of the last book helps add fuel to the fire so to speak with this newly budding romance between Cassie and Pritkin. Cassie quite literally went to hell to save Pritkin. She justifies her actions as he was sent back to hell because he saved her.  Yet, after even after going to hell and fighting the demon council for him, she still doesn’t bring him back home. He’s sent to his death backwards time traveling until he dies. BUT, and there’s always a but, she’s given the counter spell to save him the caveat being she has to find him in time. This cliff hanger leads us directly into the plot of the upcoming 7th book, Reap the Wind, which hits store shelves nationwide on 11/4/2014.