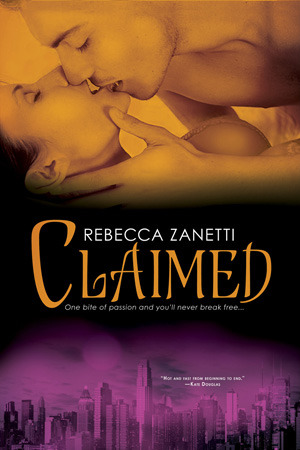 A Daring Rescue Emma Paulsen is a geneticist driven by science. But she's also a psychic, so when a dark, good-hearted vampire frees her from the clutches of the evil Kurjans, she realizes he must be the man who's been haunting her dreams. But with a virus threatening vampires' mates, Emma may discover a whole new meaning of "lovesick".

A Deadly Decision As King of the Realm, Dage Kayrs has learned to practice diplomacy. Still, it's taken three hundred years to find his mate, so he'll stop at nothing to protect her—even if it means turning his back on his own kind..

After not exactly likely the first book in this series, Fated, I decided to give the next one in the series the chance. While I did enjoy this book, I did find that the neanderthalic ways of the men in these two books continue. The lead characters in this story are Emma and Dage. Emma is the sister of the first books main character, Cara, and a brilliant scientist. Dage is the king of the realm and vampires. Emma in the first book had discovered the so called cancer drug she was working on was actually a vampire virus designed to reverse the mate claiming process. She goes into hiding to finish her research and is kidnapped by the Kurjans to be mated as she like her sister is psychic. Dage, of course, rescues her and brings her back to their compound.

The single most irritating thing in this book for me is when Emma finds out not only can she not go back to her old life in Boston, but that unbeknownst to her, Dage sold her house without her permission. As a woman, if someone had sold my house in that manner, I would exactly be falling into bed with them. The same theme of these men being able to “tame” these women by sex and using it more so like a weapon to make them submit still doesn’t sit well with me, which is a little odd to think about because I love all that is Mr. Christian Grey in Fifty Shades of Grey.

Claimed didn’t fully redeem this series for me, but I will continue onto the next book, entitled, Tempted.